I have an old Antec PSU case that I am converting into a case for my Raspberry Pi.
Currently, it looks like this. 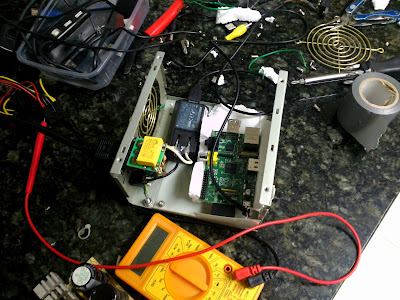 It consists of a 5V 1A fake HTC Charger, connected with a short USB cable. I have kept the IEC power plug so that the Pi can use a normal IEC power cord. The Pi is sitting in some styrofoam, which in turn is sitting on a CD case that I have screwed into the Power supply. The CD case will act as the mounting for the Pi later on.

I have the following items coming in the mail so that I can put them into the case to make it a bit easier to work with.

The USB Wifi adapter will be plugged into the Hub to give the Pi WiFi access. As the Pi will be mounted internally within the PSU, the HDMI extension cable will be used to bring out the HDMI port to the back panel. The USB hub will also be used in that manner by being mounted close to the back so that the USB ports will be accessible.

Ethernet can also be brought out by a similar extension, but I’ll be using WiFi mainly so I haven’t gotten that planned
Once I get all the stuff in the mail, I can start putting it all together !